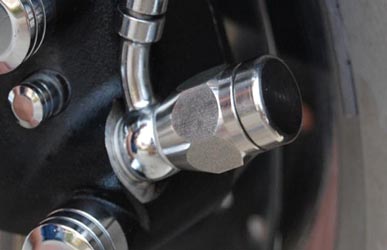 Unlike ABS, which utilizes a computer controlled sensor on the front and rear wheel, traction-controlled braking (TCB) uses a flexible diaphragm to absorb brake fluid pressure spikes, allowing the wheel to maintain rotation while braking to a controlled stop. Operating instantly, TCB allows the tires to regain traction in a safe and controlled manner.  The TCB system acts like a shock absorber to float and/or drag over the rotors’ minute surface variations, while still maintaining braking longer and stronger before locking up.

TCB increases the rider’s ability to stop in a short distance, helps to avoid premature brake lock-up, and prevents lock-ups before they happen, allowing the rider to brake harder with confidence.

TCB is a standard feature on all DiMora Custom Bikes.